This website was in connection with Mitigation Measure HR-2 (Treatment to Resolve Adverse Effects) to implement and complete National Park Service Historic American Building Survey (HABS), pursuant to Section 110(b) of the National Historic Preservation Act for adversely-affected property.  The HABS documentation is to inform and describe the history and significance of the Ace Gallery as part of the mitigation measure for the Westside Subway Extension project. General project information about the Westside Subway Extension is available on Metro’s website . Information on the Ace Gallery available on Metro’s website as part of the Historic American Building Survey and the California Department of Parks and Recreation (DPR) series 523 form .

Description
The Ace Gallery is located at 9430 Wilshire Boulevard (APN 4331001045) in a heavily developed urban commercial setting. The core building of the current Ace Gallery building was a commercial restaurant building constructed in the 1930s, which was rehabilitated in 1948/1949 to create a larger building designed in the Brutalism style of architecture. The building occupies the majority of the lot and has a north-facing orientation. The main mass is rectangular and is situated at the front of the lot. It is three stories. The balance of the building is only two stories and extends towards the rear (south). It is the front massing that has been designed to portray a Brutalist style of architecture. The front massing has a wide flat roof supported by T-shaped rafters and a wide eave overhang. The body of the front massing has an articulated concrete frame formed by large concrete pillars that extend the height of the three stories. On the upper two floors, glass curtain walls fill in-between the concrete pillars, emphasizing the vertical dimension of the building. On the front (north) elevation, a recessed pedestrian entrance is located to the east of a pass-through driveway under the upper floors to the parking lot courtyard. The rest of the building that extends to the south is designed in a strictly utilitarian manner, with metal hopper windows used sparingly, and walls made of concrete or brick. Since being rehabilitated in 1948/49 in a Brutalist style, the building appears to have not been altered and is in excellent condition.

Significance:
The building located at 9430 Wilshire Blvd. was determined eligible for listing on the National Register of Historic Places under Criterion C and the California Register of Historical Resources under Criterion 3 as a building that embodies the distinctive characteristics of the Brutalist architectural style. The building was originally designed in an Art Deco style in 1931. The primary façade, facing Wilshire Boulevard, was subsequently altered in 1948, 1956, and 1963. In 1963, architect Sidney Eisenshtat transformed the façade into the New Formalist style that exists in 2016.

Project Information:
The building is proposed for demolition as part of the Westside Subway Extension project and this documentation was prepared as a mitigation measure for the demolition.

9430 Wilshire Blvd. was identified as a building that significantly embodies the distinctive characteristics of the Brutalist architectural style. The building was originally designed in the Art Deco style in 1931 and has been a commercial presence on Wilshire Boulevard since the earliest development of the City of Beverly Hills.

Beverly Hills incorporated in 1914. Until the 1920s, it was a sparsely developed residential enclave. Beginning in the 1920s, a triangle-shaped area grew into the commercial center of the City of Beverly Hills; the northern boundary of the triangle was South Santa Monica Boulevard with Wilshire Boulevard as the southern base. As automobile traffic increased along Wilshire Boulevard and residential, institutional, and commercial development moved farther west from downtown Los Angeles, the City of Beverly Hills began to grow as a prestigious retail and social gathering place, earning a reputation as the destination for fine shops, restaurants, and movie theaters. Several prominent commercial buildings and hotels were constructed during the 1920s on Wilshire Boulevard in Beverly Hills, including the Beverly Wilshire Hotel, the California Bank Building (now Sterling Plaza), and several movie theaters, such as the Warner Beverly Theater (demolished). The Brown Derby restaurant (demolished), a popular establishment with the entertainment industry, opened at Rodeo Drive and Wilshire Boulevard in 1931. Victor Hugo’s Restaurant (demolished), an upscale dining establishment, relocated from downtown Los Angeles to the intersection of Wilshire Boulevard and Beverly Drive in 1934. 9430 Wilshire Blvd. was originally constructed as one of the many restaurants in the area. Numerous banks were also constructed in the commercial triangle. By the early 1930s, the intersection of Beverly Drive at Wilshire Boulevard was considered the downtown of Beverly Hills. More than any major street in Los Angeles County, Wilshire Boulevard reflected the increasingly automobile- oriented development of Los Angeles in the 1930s and 1940s. The boulevard was populated with elaborate billboards and prominent, projecting towers designed to catch the attention of passengers in moving cars. Architectural styles used for commercial development of the downtown core of Beverly Hills in the 1930s and 1940s reflected the sophistication of the small and exclusive city. By the 1930s, highly ornamental, symmetrical, and formal Beaux Arts-style buildings of the 1910s and 1920s gave way to modern architectural styles such as Art Deco and Streamline Moderne. This movement towards current architectural fashions reflected the city’s reputation for cultivated sophistication. Banks and restaurants were mostly low-rise buildings with decorative geometric motifs and prominent towers projecting over the roofline to attract passersby. These Art Deco and Streamline Moderne style buildings were distinguished by geometric ornamentation, emphasis on verticality, smooth wall surfaces, and large display windows along the street. Display windows oriented towards the street embraced the newer concept of window-shopping. 9430 Wilshire Blvd. was originally constructed as a restaurant building in the Art Deco style. The building at 9430 Wilshire Blvd. was a typical low-rise commercial building of Beverly Hills and Wilshire Boulevard, featuring a prominent corner entry tower and large signage above storefront windows that was easily legible for passing motorists. A restaurant called Andersen’s occupied 9430 Wilshire Blvd. from 1937 through 1941. From 1942 until 1947, the building was used as a furniture and art auction house.

The commercial office buildings of the post-World War II period were predominantly architect-designed in the popular Modern architectural styles of the day. Modest four to five story buildings were constructed in the years immediately following World War II through the mid-1950s. After the mid-1950s, buildings grew larger in scale and were built with higher construction budgets. These later buildings were characterized by a generous use of plate glass, exposed steel and concrete, and cladding of travertine, marble, and other contemporary materials associated with Modern commercial high-rise office buildings of the period. Architect Sidney Eisenshtat designed seven large commercial buildings along Wilshire Boulevard in Beverly Hills in the post-World War II period. Countywide, 1963 was the peak of high-rise construction.

After operating as a restaurant and auction house, 9430 Wilshire Blvd. became a branch of Bank of America National Trust & Savings in 1948 and was substantially altered multiple times in the 1950s and 1960s. Eisenshtat designed a New Formalist façade and a porte cochère along Wilshire Boulevard for the building when it became a branch office of Continental Bank of Los Angeles in 1963. The remodeled building was touted as “the newest member of Beverly Hills’ multi-million dollar financial center…” The new interior included a public meeting room and a glass-enclosed conference room available to community organizations. Community groups often met at the bank and documentary films were shown there. Continental Bank of Los Angeles made the building its head office in 1966. The building remained a bank through the 1970s. It became a Christmas themed retail store in the 1980s. In 2003, it was converted into an art gallery.

Both Brutalism and New Formalism were popular Late Modern styles during the 1960s and 1970s. As a style, Brutalism communicated modernity as well as safety, security, and permanence with a bunker-like appearance constructed in heavy materials. As civil unrest became a common element of American urban life in the late 1960s, the lightness and transparency of Mid-Century Modern designs declined in popularity for public, commercial, and institutional buildings. The bunker-like appearance of Brutalism, however, made it generally less inviting and it was not popularly used as a style for commercial retail buildings. New Formalism was a more popular style choice, especially for financial institutions, with designs often executed in expensive materials such as marble, travertine, bronze, and brass.

New Formalism evolved from Mid-Century Modern architecture; the legacy of post-and- beam construction can be seen in the flat roof, projecting cornices, and angular geometries that characterize buildings in the New Formalist style. While the shapes and repetition of solids and voids may form patterns similar to Brutalism, New Formalism was a style more rooted in classical forms and compatible with existing urban streetscapes. The New Formalist style used classical architectural components such as lintels, piers, columns, and cornices. These forms were sometimes abstracted in pure geometric components. New Formalist façades were even planes, often a stone veneer devoid of ornament, or a pierced concrete screen. Expensive materials, such as marble veneer and bronze, referenced traditional materials in classical architecture. Windows were arranged in linear bands to maintain the even plan where possible. Noteworthy architects of New Formalism in Los Angeles included Langdon & Wilson, A. Quincy Jones, and Edward Durrell Stone.

Brutalism began as the neo-avant-garde movement of the British architectural scene in the 1950s and was published widely in the architectural press, particularly in Architectural Design and the Architectural Review. Two English architects, Alison and Peter Smithson, coined the term “Brutalism,” in 1954. The term came from the French word for raw concrete, “béton brut,” and gained popularity when the British architectural critic Reyner Banham used it in the title of his 1966 book “The New Brutalism: Ethic or Aesthetic?” to identify the emerging style. Brutalist architecture was a reaction to the white cube functionalist architecture of Mid-Century Modernism. Brutalist architects abandoned the pre-war idea that reinforced concrete was a precise, machine-age material. They celebrated the marks left on the face of the concrete by rough wooden formwork and visible natural coloration and rough appearance of aggregate.

Brutalism as an architectural style was distinguished by material, form, and site. Concrete is the material most often used in Brutalist buildings, and it was often left in a raw, unfinished state that revealed the texture of the wooden forms used to cast it. Buildings in the style usually had an exposed, unpainted, cast-in-place structure of architectural concrete. Unpainted exposed concrete, raked or smooth, dominated visible elevations. Precast constructional units were arranged in deeply indented spaces that created interplays of light and shadow. Although concrete is the material most widely associated with Brutalist architecture, not all Brutalist buildings were formed from concrete. The Brutalist quality was achieved through a rough, blocky appearance and recessed main volumes. Bold, oversized angular shapes and distinctive geometric forms were used to break up the rectangular form of the main volume. For a bank building, more expensive materials such as marble and travertine could be arranged in the blocky recesses that characterized the style.

Brutalist buildings were also often part of “superblocks,” deviating from the established building and parcel pattern along a street and dominating an entire block with an exaggerated set back. Because of the site, massing, and repetition of forms, Brutalist buildings often do not have a readily apparent primary façade. Buildings in the Brutalist style may be symmetrical masses or asymmetrically piled blocks, but they were always defined by striking repetitive angular geometries forming solids and voids and a raw quality to finished surfaces. The inverted pyramid shape was a very common massing for Brutalist buildings. AC Martin and Associates was the most noteworthy architect of Brutalism in Los Angeles.

B. Description of Exterior

A. Architectural drawings: No original drawings of 9430 Wilshire Blvd. were located.

B. Early Views: No early views of 9430 Wilshire Blvd. following the Sidney Eisenshtat designed alterations in 1963 were located. 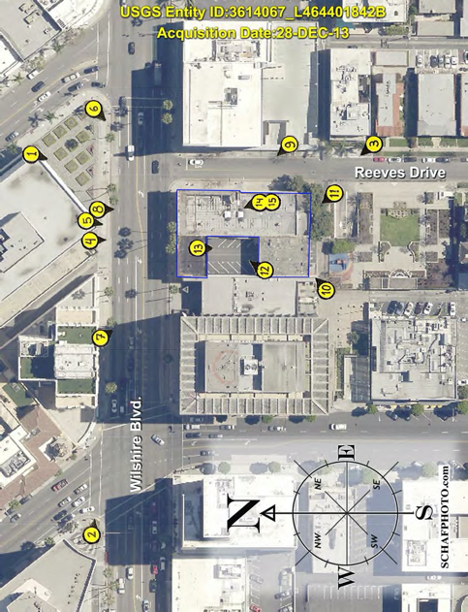 Index to Black and White Photographs