Metro began an Alternatives Analysis (AA) Study for the Westside Extension Transit Corridor in Fall 2007. The AA Study is the first step in defining a potential transportation project to improve mobility in the 38 square mile study area.  The Study is required to evaluate a wide range of mode and alignment alternatives before identifying the most promising option or options for further environmental review. 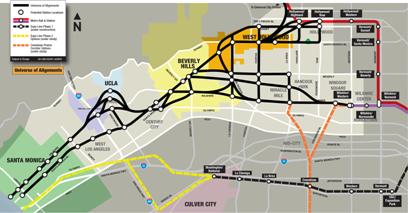 Two sets of community meeting have been completed so far and over 750 comments have been received to date. Early scoping meetings were held in October 2007 where the public was asked to identify their preferred routes, modes and other priorities for improving mobility on the Westside of Los Angeles. In January/February 2008, a second series of meetings was held to present the preliminary set of 17 build alternatives developed in response to comments heard during the early scoping period. These alternatives included various alignment options for a subway along the Wilshire Boulevard corridor, a subway along the Santa Monica Boulevard corridor, a combined subway along both the Wilshire and Santa Monica Boulevard corridors, some aerial options (including elevated heavy rail, light rail & monorail), and a Bus Rapid Transit (BRT) option.  Metro is also required to study a No Build alternative as well as a Transportation Systems Management alternative (which provides basic improvements to the existing transit system).

A third set of meetings is slated for May 2008 to again update the public about the study and to present a set of 5 of the highest performing build alternatives which were refined based on the evaluation criteria which include factors such as mobility improvements, transit-supportive land uses, cost effectiveness, feasibility, equity, environmental considerations and,very importantly, public acceptance.  These alternatives have been narrowed to encompass 2 Wilshire subway alternatives, 2 Combined Wilshire/Santa Monica subway alternatives and the BRT.

The Wilshire Boulevard subway as well as a combined Wilshire/Santa Monica subway have moved forward for further consideration in the AA Study as a result of their performance on measures such as capacity to meet travel demand forecast for the area, new ridership, travel time savings, and cost effectiveness. These alternatives were also selected because of their ability to first serve higher-density areas, minimize traffic and other environmental impacts, and fit within the dense, urban Westside area.  The Santa Monica Boulevard subway alternatives were eliminated because they did not perform as well as the Wilshire subway or combined Wilshire/Santa Monica subway alternatives in terms of ridership and cost effectiveness.  The aerial alternatives were eliminated due to substantial impacts on the urban fabric, potentially high mitigation costs (such as right-of-way purchases, streetscape impacts, removal of traffic lanes), as well as their ability to handle the forecasted travel demand.
Next Steps

In the coming months, Metro will continue to refine and evaluate the remaining alternatives with the goal of developing a recommendation in the summer.  The recommendation could include a preferred mode, a general alignment and general station locations.  In the fall, the Metro Board of Directors will consider the recommendation and decide whether to authorize a full environmental review and engineering studies.  These further studies would need to be completed before a project could proceed.

Please visit News and Info for copies of materials presented at the previous meetings, as well as other study information. For additional information or questions, to learn about upcoming meetings or to sign-up for study updates, please go to Contact Us or contact the project information line at 213.922.6934.  You can also find us on Facebook at “Metro Westside Extension.”