Download a pdf of the Westside Subway Extension Factsheet .

Background In fall 2007, Metro began an Alternatives Analysis study to look at whether a transit improvement was needed on the Westside, and to evaluate a variety of potential options to improve mobility in the area. Following the passage of Measure R, this extensive 18-month effort moved to the next phase in January 2009 when the Metro Board of Directors approved the Alternatives Analysis study and authorized staff to proceed with the next phase of the project — preparing a Draft Environmental Impact Statement/Environmental Impact Report (Draft EIS/ EIR) for the Westside Subway Extension. Based on the Alternatives Analysis, the Board approved analyzing two recommended Build alternatives, as well as a No Build and a Transportation Systems Management alternative.

Initiation of the Draft EIS/EIR Phase

In April 2009, Metro initiated the Draft EIS/EIR process with six community Scoping meetings where the two build alternatives — the Wilshire Subway and the Wilshire/West Hollywood Subway — plus the No Build and Transportation Systems Management options were presented to the public. Metro invited comments on these alternatives and the issues to be studied in the Draft EIS/EIR. Over three hundred comments were received by the conclusion of the scoping period.

The most frequent comments:

The comments received during the scoping period are incorporated into a Scoping Report and will be used to guide the preparation of the Draft EIS/EIR technical analysis.

What are the two alignment options being considered? 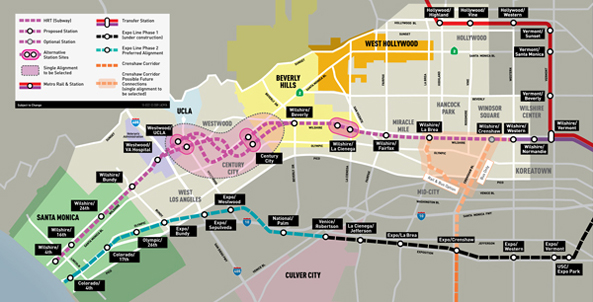 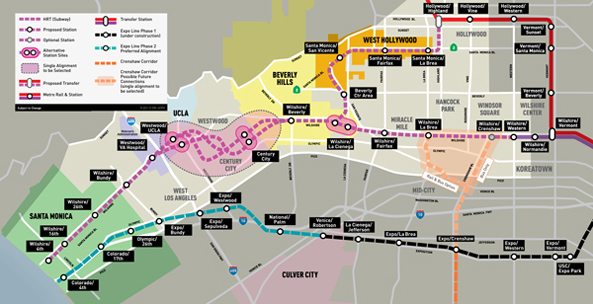 Refinement of the Alternatives

With your help, Metro has refined the extension’s route alternatives.

For those locations where there is still more than one possible station site, Metro is proceeding with additional engineering and environmental studies to select the best station location. We are also continuing to refine the alignments between the stations. Detailed planning of the stations is also underway to identify locations for station entrances and other station details. Further, many of the details related to construction, such as where construction staging will occur and where tunneling machines will be lowered into the ground and earth removed, are also under consideration.

The required “No Build” Alternative includes all existing highway and transit services, along with the planned highway and transit projects for which funding has been identified through 2035. The Draft EIS/EIR must also consider the Transportation Systems Management Alternative, which enhances the No Build Alternative and improves upon existing Metro Rapid Bus service and local bus service in the Westside Subway Extension study area.

What can be expected at the conclusion of the draft EIS/EIR?

The purpose of the Draft EIS/EIR is to study the potential effects of the project during construction and once it is operating, and also to evaluate measures to avoid, minimize and mitigate any adverse impacts. As a part of this effort, Metro will further reffine the project alternatives, deffine initial Wilshire Bl segment(s) that can be built with the funding from Measure R, specify station details, examine the cost effectiveness of various segments and evaluate the timing and funding for a future project. It will also identify potential future segments that could be built if they are determined to be cost-effective and additional funding can be identified. The study must also evaluate Minimum Operable Segments. The Minimum Operable Segments that will be evaluated are extensions from Wilshire/Western to: (1) Fairfax, (2) Century City, (3) Westwood/405 and (4) Westwood/405 plus the West Hollywood connection. The Study will also evaluate the entire alignment to Santa Monica both with and without the West Hollywood component. The West Hollywood segment, as well as the segment beyond West LA to Santa Monica, do not currently have funding identified. At the conclusion of the Draft EIS/EIR, the Metro Board will be asked to adopt a Locally Preferred Alternative defining the project that can be built within anticipated funding and that will move forward into the Final EIS/EIR process. The adopted Locally Preferred Alternative will identify the project for which Metro will seek federal matching funds.

During the next 18 months, Metro will:

The Draft EIS/EIR scoping period is closed, but Metro continues to invite comments on the alternatives. Comments may be submitted in a number of ways as follows:

For additional information, to be added to our project mailing list or to schedule a meeting for your group or organization, please go to the study web site, call our Information Line at 213.922.6934 or find us on Facebook: “ Westside Subway Extension .”