Marking its first deployment of bike share in the San Fernando Valley, the Los Angeles County Metropolitan Transportation Authority (Metro) has partnered with the City of Los Angeles to launch new “Smart” Metro Bikes in the North Hollywood area, the Valley’s premiere arts district and its busiest transit hub. 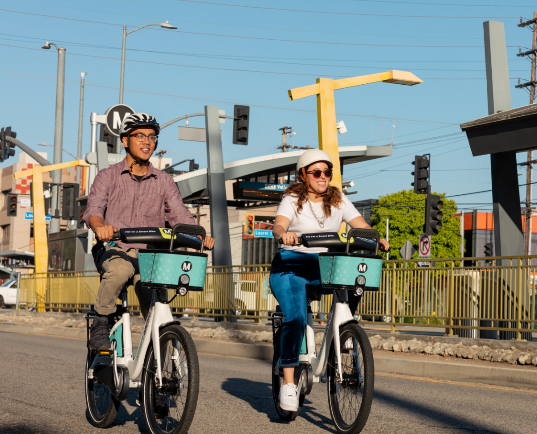 Sixteen new Metro Bike Share stations with up to 150 bicycles have now been installed in North Hollywood, Toluca Lake and Valley Village. An additional six stations and 50 bicycles will be added by the end of the year. Metro Bike Share stations will now be available at or near the Metro Red/Orange Line Stations, the NoHo Arts District, the Chandler Bikeway and will connect Metro Bike Share riders to the ever-expanding gallery, theatre, café and restaurant scene in the neighborhoods surrounding Lankershim and Magnolia Boulevards.  Other local destinations now accessible via Smart Metro Bikes include the Great Wall of Los Angeles, North Hollywood Amelia Earhart Branch Library, the Television Academy, North Hollywood Gateway and Campo de Cahuenga.

The bikes themselves are designed for ease-of-use, comfort and convenience. They come with baskets, pannier-compatible racks, front and back lights, wide tires and eight speeds.

“North Hollywood is one of L.A.’s most unique neighborhoods, a vibrant and growing community full of families and young people who live, work and play in the area,” said L.A. City Council Member and Metro Board Member Paul Krekorian. “Within just a few blocks, you can ride your bike, walk to great shops and restaurants, and hop on the bus or Metro to get where you need to go. That’s why I’m excited to join Metro to launch the San Fernando Valley’s first Bike Share program in North Hollywood. This is an opportunity for us to encourage even more people to connect with our city and each other in new, more active and sustainable ways. I hope everyone hops on a Smart Bike and explores all the great things the area has to offer.”

Metro worked closely with the Los Angeles Department of Transportation (LADOT) to determine the location of bike share stations in the North Hollywood area.

“Bike share’s benefits are proven — it’s good for local business, the environment, and reducing congestion,” said LADOT General Manager Seleta Reynolds. “LADOT is a proud partner of Metro's Bike Share expansion to bring this service to the San Fernando Valley. With better connections to the Red and Orange lines, this expansion will give commuters in North Hollywood and throughout the Valley more options for getting around in a fun and accessible way.”

The agency’s Smart Metro Bikes, also available on the Westside, solve one of the challenges associated with using shared bicycles to reach city destinations that may not have a readily available docking station. Because these bikes accommodate Metro’s TAP card functionality, bike share riders can also easily use the card to ride other Metro and municipally operated transit services in L.A. County. To use a TAP card to unlock these bicycles, TAP cardholders must first enroll in the Metro Bike Share Program and register their tap cards at taptogo.net/metrobikeshare.

The bikes will be operated by Bicycle Transit Systems and provided by BTS’ partner BCycle, a unit of Trek Bicycles of Wisconsin. These companies have successfully launched and/or operate more than 40 bike share systems in metropolitan areas in the United States and abroad.

“Bicycle Transit Systems is thrilled to facilitate the expansion of Metro Bike Share to North Hollywood,” said Alison Cohen, CEO of Bicycle Transit Systems. “With more bikes in more places, Angelenos will have many opportunities to incorporate bike share into their daily commutes. This will hopefully eventually change the way both locals and visitors get around Los Angeles, one ride at a time.”

There are now 1,500 Metro Bikes and 150 stations located Downtown L.A., Central L.A., Port of L.A., North Hollywood and the Westside. Metro plans to expand the Metro Bike Share program to create a system of more than 4,000 bicycles countywide over time.

To date, approximately 800,000 trips have been made on Metro Bike Share in Los Angeles County. Bike share riders have collectively traveled over 2.4 million miles on the bicycles since the program launched and have reduced over 2.3 million pounds of carbon dioxide – a major greenhouse gas – emissions from the air.

Local users interested in riding a Smart Metro Bike can download the Metro Bike Share app available on iOS and Android platforms. The app will enable them to buy a pass, see bike and dock availability, and view the nearest stations and service area boundaries, among other features.

About Metro
The Los Angeles County Metropolitan Transportation Authority (Metro) is building the most ambitious transportation infrastructure program in the United States and is working to greatly improve mobility through its Vision 2028 Plan. Metro is the lead transportation planning and funding agency for L.A. County and carries about 1.2 million boardings daily on a fleet of 2,200 low-emission buses and six rail lines.