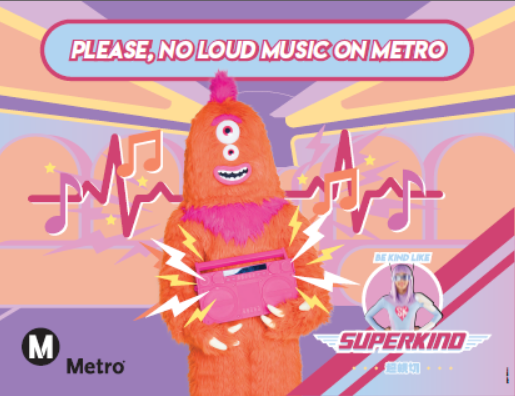 “Amelia Earhart, who was arguably one of the great travelers of all time, said, ‘A single act of kindness throws out roots in all directions, and the roots spring up and make new trees.’ As an increasing number of transit riders take advantage of Metro, it becomes ever more important that we are courteous and kind to one another,” said Metro Board Chair and Los Angeles County Supervisor Sheila Kuehl. “This Metro Manners campaign reminds us all that kindness is a critical component to an enjoyable ride for everyone.”

Metro’s Customer Code of Conduct includes courtesy and safety rules that apply to all transit riders. Playing loud music that disturbs other riders is prohibited. Riders seeking to listen to music should use headphones or earphones that make the sound inaudible to others. Patrons should not sell any goods, food or other services while onboard Metro buses and trains. Riders trying to board trains are also requested to wait on the platform until all departing customers have left the train to help ensure passengers can safely exit the train.

“Each one of our riders have a role in creating a better transit experience for themselves and others by honoring these simple etiquette rules,” said Metro CEO Phillip A. Washington. “We rely on you, our loyal customers, to help us provide a world-class transportation system for our county.”

Metro originally teamed with creative production studio Lord Danger and director Mike Diva to develop the campaign last year. The campaign’s colorful approach was developed by Diva, whose interpretations of pop culture and digital connectedness has resulted in tens of millions of views on social media. Metro Manners was the first integrated campaign for Diva and Lord Danger. The producers cast Anna Akana, who has more than 1.8 million subscribers on YouTube for her weekly series, as Super Kind, Metro’s official protector of the agency’s Customer Code of Conduct. Rude Dude was designed in conjunction with noted collaborator FONCO.

The first round of Metro Manners videos raised awareness about prohibited behaviors such as seat-hogging, blocking aisles and eating and drinking while riding. It was a viral sensation on social media, drawing tens of thousands of likes and shares for the campaign. Metro also received an American Public Transportation Association Marketing award for its campaign.