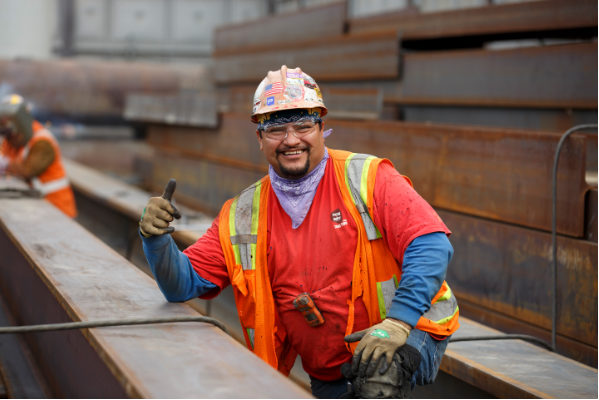 Officials gathered on the Great Lawn of the La Brea Tar Pits Museum and Park in Los Angeles’ Miracle Mile District for a community celebration to mark the occasion and thank residents and businesses for their support during subway construction along and under busy Wilshire Boulevard.

“Construction is never easy but Metro is successfully building the Purple Line Extension through one of the most congested urban corridors in the entire country while keeping the hassle-factor pretty low for most people,” said Los Angeles County Supervisor and Metro Board Chair Sheila Kuehl. “Because of everyone’s support and patience, we’re on track to get the first leg of the subway open all the way to the front gates of Beverly Hills by 2023.”

The Purple Line Extension to Westwood is being built in three sections. Metro broke ground on this first section of the project in November 2014. Major utility relocation work began in early 2015. In 2016, Metro’s contractor began consecutively digging three underground stations. Workers have now completed excavating the future Wilshire/La Brea and Wilshire/Fairfax station sites and are only 20 feet from reaching the bottom of the third and final station site at Wilshire/La Cienega.

Metro has contracted with Skanska Traylor Shea, A Joint Venture to design and build the first section of the project.

“The Purple Line Extension is integral to L.A.’s transportation future — and today’s milestone is proof of our extraordinary progress,” said Mayor Garcetti. “Once complete, riders will be able to take a world-class subway from the Westside to Downtown Los Angeles in just 25 minutes — easing congestion in our most gridlocked neighborhoods and giving people better access to everything Los Angeles has to offer in time for the 2028 Summer Olympics.”

Metro has implemented several initiatives to help mitigate the impacts of subway construction on local communities. These include a Business Interruption Fund and an Eat, Shop, Play program to promote and preserve access to local businesses during construction.

“These mitigation programs are essential to the Wilshire community of small businesses located near our subway construction zones,” said Metro CEO Phillip A. Washington. “We understand that their continued success – if not their survival – is linked to the availability of these beneficial programs. We want all our local shops to be around to enjoy the bump in business we think they’ll get once the subway is done and open in a few years.”

The first section of the Purple Line project has an overall budget of $3.1 billion and includes three new subway stations between Koreatown and Beverly Hills. The second section, at a cost of $2.5 billion, will extend the line to Beverly Hills and Century City and is also under construction. The third and final section will extend the subway from Century City to stations at Wilshire and Westwood boulevards and the Westwood/VA Hospital by 2027 and has a budget of $3.6 billion.

Overall, the project is funded with up to $5.2 billion in federal grants and loans and the voter-approved Measure R and Measure M sales taxes approved by L.A. County voters in 2008 and 2016, respectively. Measures R and M are providing critically needed local funding being used to attract the federal contributions and accelerate construction work.

When completed, the Purple Line Extension will connect downtown Los Angeles and the Westside — which has the second-most jobs in the L.A. region — with high-speed, high-capacity transit service. A trip between these two dense urban centers is expected to take about 25 minutes.

The extension will generate about 49,300 daily weekday boardings at its seven new stations. Overall, 78,000 new daily trips are forecast to be taken on the Metro Rail system due to the subway expanding ridership.