The Los Angeles County Metropolitan Transportation Authority (Metro) joined elected officials and community members today in Century City for a ceremonial naming and unveiling of its second set of tunnel boring machines that will dig twin subway tunnels between Beverly Hills and Century City. Subway tunneling is expected to begin in early 2020. 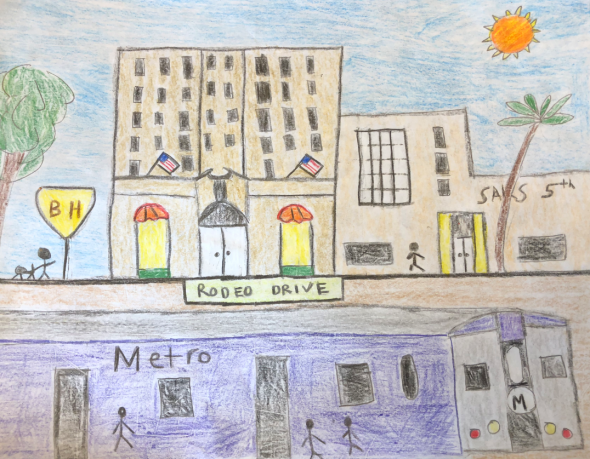 Metro Board Director and City of Los Angeles Mayor Eric Garcetti appointee Jacquelyn Dupont-Walker awarded TAP Cards and other prizes to students who won contests to name the TBMs and create illustrations for the TBM tail shields. More than 2,500 votes were cast for the contests. The names “Harriet” and “Ruth” were selected from a winning entry submitted by 6th grade Turning Point School student Ruby Santamaria. Harriet and Ruth were named after Harriet Tubman, known for her role in the Underground Railroad, and Justice Ruth Bader Ginsburg, who fights for gender equality and social justice.

“It is so fitting to have Harriet and Ruth, named after two of history's greatest sheroes, blazing the path for this critically important transit project," said L.A. County Supervisor and Metro Board Chair Sheila Kuehl. "We are glad to see such enthusiastic community involvement in naming these new TBMs.”

Metro has received the cutterhead and shield for its tunnel boring machines, which are now staged at Metro’s Century City Station construction yard. TBMs will be assembled at the station site and will dig eastward to Wilshire/La Cienega in Beverly Hills. Metro’s Section Two contractor, Tutor Perini O&G, is building this portion of the project.

“I’m proud to welcome our two newest Angelenos — Harriet and Ruth — who embody the best of the Angeleno spirit,” said Metro Board Second Vice Chair and Los Angeles Mayor Eric Garcetti. “Their work will continue our great progress toward realizing an integral part of our transportation future — a reliable, sustainable connection between Downtown and the Westside.”

The TBMs are manufactured in Germany by Herrenknecht AG. They weigh approximately 1,000 tons, are 400 feet long and are 21.75 feet in diameter. They will advance about 60 feet per day once digging begins. The depths of tunnels will vary throughout the underground alignment, ranging from 50 to 120 feet. TBMs will tunnel five days per week, 20 hours per day and take approximately two years to complete their work.

TBM naming is a mining tradition that dates to the 14th century. Saint Barbara, the patron saint for military engineers and miners, has been revered by underground workers as a symbol of protection and good luck for centuries. This homage evolved into the tradition of giving tunneling machines a female name before digging begins.

“With the arrival of these two new TBMs, we are another step closer to bringing the Purple Line Extension to reality,” said Metro CEO Phillip A. Washington. “When it’s completed, the subway will reduce travel times between the Westside and Downtown L.A. to just 25 minutes and give Angelenos a new high-speed, high-capacity transit alternative they’ve been waiting many decades to ride.”

The second section of the Purple Line Extension Project spans 2.59 miles and includes two new stations at Wilshire/Rodeo in Beverly Hills and Century City/Constellation in Century City. The extension is expected to open in 2025.