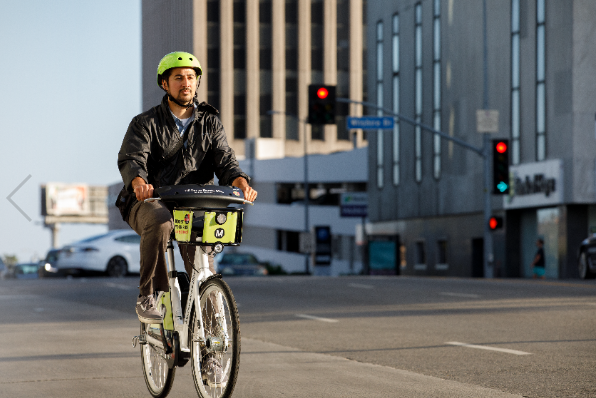 More than 300 electric Metro Bikes will be added to Metro’s bike share fleet and more than 20 new stations will be installed in the Central L.A. areas of Expo Park, University Park, Pico Union, Koreatown, MacArthur Park, Echo Park and Silver Lake starting today through the end of the summer. The e-bikes and station expansion are made possible through a $2+ million Active Transportation Program Greenhouse Gas Reduction Fund grant that Metro received last year from the State of California.

Electric Metro Bikes provide bike share riders with an electric “boost” for extra power for navigating local roadways. The bikes are operated by Metro’s bike share contractor Bicycle Transit Systems, Inc. They are produced by the company’s equipment provider BCycle and are powered by mid-drive pedal assist motors and batteries. The bikes can lessen the physical effort required to pedal and expand opportunities for bicyclists to complete their first/last mile connections from farther distances and to reach more elevated neighborhoods. The bikes will help the user to pedal up to 17 miles per hour.

“Metro is introducing a new group of no-sweat bikes. Now you can get off your train or bus, hop on a bike, and pedal where you’re going. Climbing hills and riding long distances are no obstacle because you’ve got an electric motor that will help you glide from the Metro station to your destination,” said L.A. County Supervisor and Metro Board Chair Sheila Kuehl.

Metro worked closely with the City of Los Angeles to determine the location of new bike share stations in the Central L.A. area, including near major transit hubs and key local destinations.

“It's a fact that electric bikes make getting around by bike easier for more people more often,” said LADOT General Manager Seleta Reynolds. “We are confident that they will connect more Angelenos to each other and to greater opportunities.”

Users interested in choosing an electric Metro e-bike can download the Metro Bike Share App from the Apple App Store for those with iOS devices or the Google Play store for those with Android devices. The app enables riders to check bike and dock availability and find the nearest Classic Metro Bike Station to their location, among other features. There will be an additional $1 fee for unlocking the bikes that will be waived until August 31. The fee will go toward maintaining the electric bikes and ensuring battery packs are consistently charged.

Bicycle Transit Systems and its partner BCycle have successfully launched and/or operate more than 40 bike share systems in metropolitan areas in the United States.

“Bicycle Transit Systems is elated to introduce electric bikes to shorten Los Angeles' long distances and flatten its hills, making our region a cleaner, greener and quieter place to live, work and play,” said Allison Cohen, CEO of Bicycle Transit Systems. “We pledge to maintain and charge these e-bikes to allow Angelenos and visitors to travel safely on this exciting new transportation option.”

Metro’s Bike Share program is planning to expand to many other communities within L.A. County, including North Hollywood and other San Fernando Valley cities to create a region-wide system of more than 4,000 bicycles countywide.

To date, more than 734,000 trips have been made on Metro Bike Share in Los Angeles County. Bike share riders have collectively traveled 2.2 million miles on the bicycles since the program launched in mid-2016 and have reduced 2.1 million pounds of carbon dioxide emissions – a major contributor to climate change.