The Metro Crenshaw/LAX Transit Project will extend from the Green Line to the Expo Line and will serve the Crenshaw District, Inglewood, Westchester and surrounding area with eight stations. (Read more about the transit project here.) 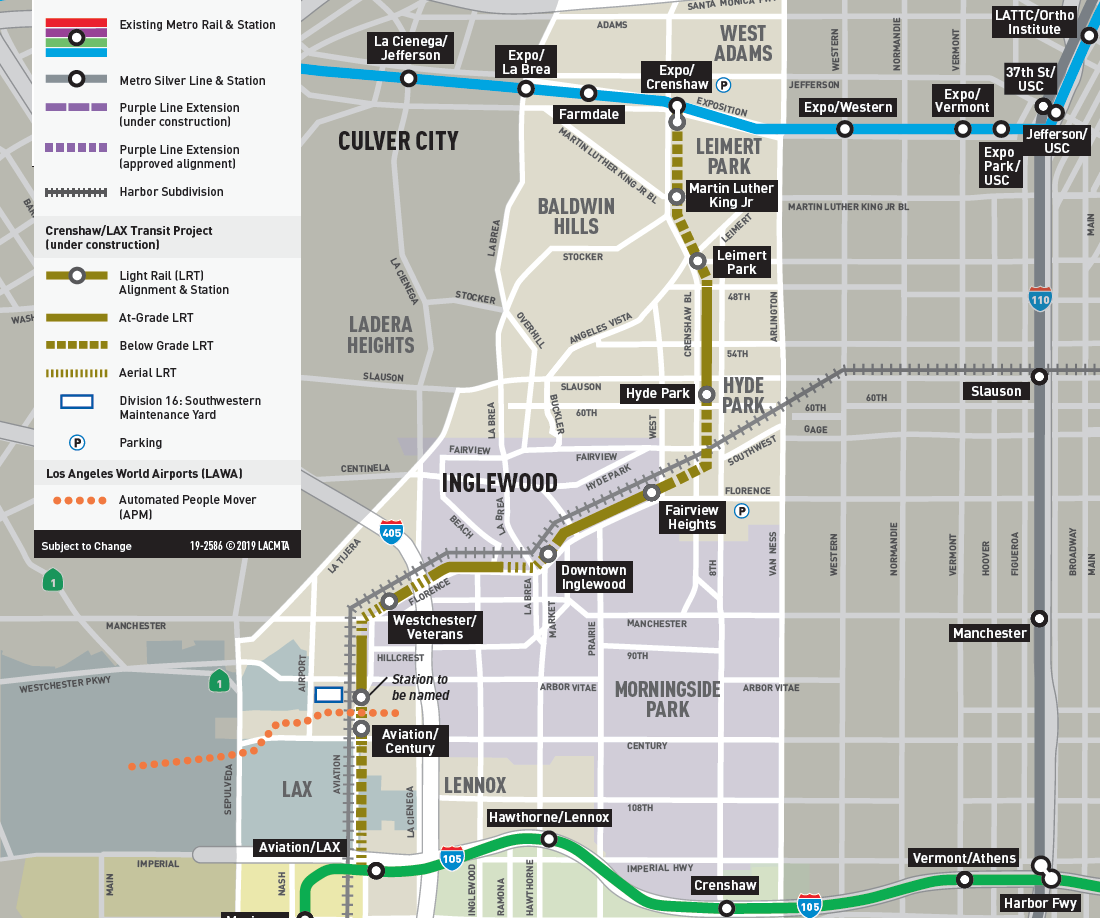 Rebeca Méndez, At the Same Time

"At the Same Time can be understood as . . . [an] emotional timepiece . . . inspiring us to bring our mind and body as we experience, if just for a moment, the fullness of time expressed in the sky above us."

Rebeca Méndez’s two mosaic murals transform the concourse wall into a sublime panorama of the sky as seen from Los Angeles. Articulating the progression of time over 24 hours, vertical segments portraying the stars and the moon flank an ethereal cloud-scattered azure. The atmospheric slices were transcribed from photographs taken at 15-minute intervals over a number of days and nights. A second mosaic of a lofted bird wing references the migrations of the Arctic tern, while also evoking the angels called upon during West Angeles Cathedral’s sermons nearby.

"The pavilion becomes a colorful beacon signifying the vibrant activities of the neighborhood."

Erwin Redl’s dynamic artwork takes advantage of the changing position of the sun to reflect an array of colors onto surrounding surfaces by day and transforms the glazed pavilion into an illuminated jewel box by night. The radiating, colored patterns enhancing the pavilion glass are inspired, in part, by the vibrant colors and forms of West Angeles Cathedral across the street at Crenshaw and Exposition Boulevards.

"Speaking to the people of the community, getting a sense of what was important to them, was the crux of my idea and my inspiration."

Jaime Scholnick’s frieze-like collages are based on hundreds of studies and more than 11,800 photographs of the surrounding neighborhood. Progressing from dawn to night, the artist spent many hours documenting the area around the station and talking to local residents about their visions for the artwork. She also collaborated with youth through the Leimert Park–based RightWay Foundation, who contributed their photographic perspectives to the project.

Eileen Cowin, You are heading in the right direction

"Ideally, passengers will pick up where my work left off as they travel on the train . . . and see the surrounding life, the individual characters and the recognizable vistas that make up the backdrop of their own stories."

Eileen Cowin aims to spark the imaginations of transit riders through a poetic juxtaposition of photographic vignettes inspired by the potential stories of passersby. The fourteen filmstrip-like art panels invite viewers to create narratives from a collection of nonlinear scenes that feature local community members at businesses and locations surrounding the station. The multilayered imagery allows riders to imagine and reimagine different stories about the people and places in the artworks.

"Stained-glass windows, weathervanes, sculpted trees and exterior ornaments . . . are as unique and fascinating as the long-time inhabitants of this neighborhood’s houses and apartments."

Mara Lonner’s artwork is inspired by the surrounding Leimert Park neighborhood, of which she was a long-time resident. Her collaged renderings of Japanese-influenced landscaping, architectural embellishments such as weathervanes and stained-glass windows, and distinguishing signage allude to the businesses, institutions and cultural landmarks—both past and present—that have been imprinted by this unique community.

Shinique Smith, Only Light, Only Love

"The flow of the city, fashion, the graffiti of my youth and Japanese calligraphy influence these gestures, as I extract what I see as the graceful and spiritual qualities in the written word and everyday life."

"[The artwork] takes the recording of the present as a moment in flux as its starting point. It will be a library of signs from the neighborhood"

Ingrid Calame collaborated with youth through the RightWay Foundation to create rubbings of the physical environment—from furniture and instruments to architectural elements such as doorways and signs, all found in the neighborhood. The resulting textural abstractions appearing in the subtly hued compositions imbue value on objects that are often overlooked or taken for granted.

"The freedom to move throughout the county for all people is the essence of the Metro. This artwork and this Metro station can hopefully act as a celebration of possibility and a reminder of the foundational importance of movement."

Dean Erdmann’s porcelain enamel art panels depict double-exposed photographs of natural elements in Leimert Park interspersed with images of the transit environment. The vivid, poetic dreamscapes are inspired by the act of viewing the passing landscape through a train or bus window overlaid with images reflected on the glass.

"The artwork makes a sweep across the Los Angeles Basin, from the Pacific to the mountains, interweaving textile swatches, architectural patterns, and images and silhouettes that pay tribute to the bustling energy and distinct character of the neighborhood and city."

Mickalene Thomas’s mosaic was inspired by the quality of light, cultural and visual richness, and iconic structures in the surrounding Leimert Park neighborhood. Before translating the work into a mosaic, the artist used painting and photocollage techniques to create the layered composition, which integrates many of the natural and architectural elements characterizing the community. The Leimert Park fountain, Vision Theatre, and Japanese-inspired home garden designs are among the featured motifs.

"South Los Angeles has provided a soundtrack for the city for generations, and, like the solitary drummer in the woods, this soundtrack echoes outward influencing and inspiring."

"My goal is to feed the curiosity of visitors and perhaps teach them something new about the city they are living in or riding through."

"My hope is to inspire people to notice strangers who [they] stand among and extend a sense of empathy in recognition of their humanity."

Kenturah Davis created Sonder with the aim to encourage connections between strangers, even temporarily while riding transit. The porcelain enamel steel art panels portray various figures against a backdrop of letters that form words defining “sonder,” a newly coined term alluding to the realization that every person has a unique and significant story. Based on photographs taken during gatherings hosted by the artist, the portraits feature individuals with ties to the Inglewood community.

Geoff McFetridge, Us as a Measure of Openness

"I am trying to capture how this city constantly surprises me with its diversity and confounding polarities of experience. Los Angeles is urban in a way that can accurately be described as abstract."

Rendered with bold, flat colors on a stark backdrop, Geoff McFetridge’s striking artworks depict communities of people interacting with large abstract shapes. From mothers and children to gardeners and lawyers, the figures are unique and expressive. The geometric forms allude to architecture and city infrastructure, which both support and are supported by the people.

"As a daily Metro user, I experience the convergence of people from a multitude of backgrounds. I consider the train platform a gateway and threshold for riders as they connect one part of their day with the next. It is a place where the diversity of the city is highlighted and where the interaction between its citizens and visitors is most dynamic."

Sherin Guirguis’s richly colored artworks reflect the countless individuals who have migrated to the area, many of whom have risen above tremendous obstacles. Combining visual references from the station site, such as the colors of the sky at dusk and dawn, and ironwork adorning the porches of nearby homes, she also alludes to her own history and journey to Los Angeles. Considering the cultural, social and spatial histories shared by transit users, the artwork reflects the diversity of the surrounding neighborhood and city of Los Angeles.

The Crenshaw/LAX Transit Project Art Program includes an ongoing series of Meet-the-Artist events, presentations, community engagement workshops, performances and exhibitions.  To be kept informed of these events, please sign up for our email list.

As part of efforts to mitigate visual impacts during project construction, temporary art banners were installed on construction site fences along the project corridor. Metro Art hosted a series of workshops at Lula Washington Dance Theater, KAOS Network, Inglewood Center for Spiritual Living, and Inglewood High to mentor local youth on designing banners that celebrate neighborhood icons. The series was coordinated through the nonprofit arts education organization artworxLA and was led by artist Michael Alvarez.

Artsy: “These Emerging Black Artists Are the Future of Figurative Painting” (February 11, 2020)

Streetsblog LA: “Art, the Crenshaw/LAX Line, and the Stories We (Don’t) Tell at Train Stations” (November 1, 2018)

Los Angeles Magazine: “An Early Look at All the Artwork Coming to the Metro Crenshaw Line” (January 22, 2018)

Streetsblog LA: Fourteen Artists Named for the Crenshaw Line; What Can We Expect to See From Them? (April 17, 2015)

For more information about the Metro Art program, projects in the works, tours, events, publications and artist opportunities: