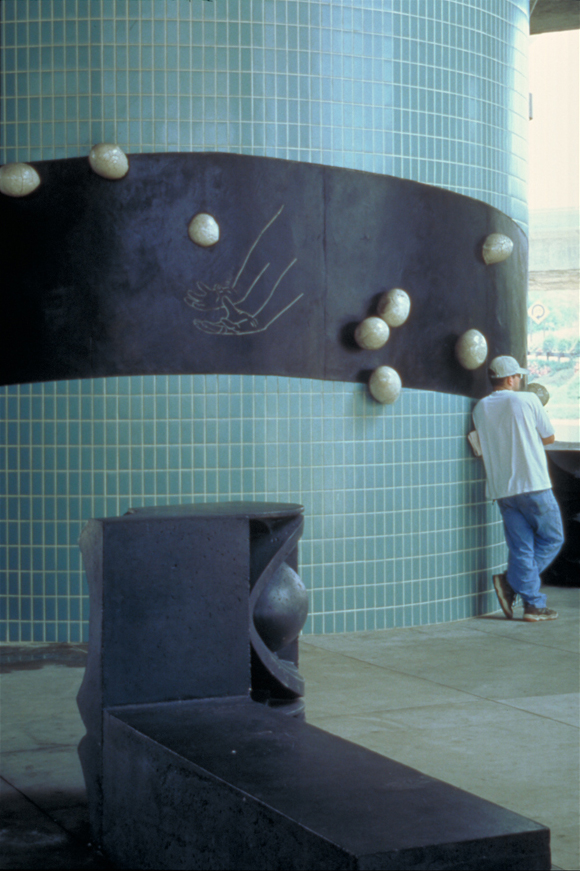 For this station, which is entwined in one of the city's most complex freeway intersections, artist Steve Appleton attempts to architecturally connect the South Central site with greater Los Angeles. Appleton worked with Caltrans to design an arching, torqued copper canopy that makes a bold sculptural statement within the intersection environment.

At the entry to the station, a circle of concrete tiles is sandblasted with patterns of hand gestures. Created by Appleton with a group of students from nearby Locke High School, the entry tiles represent the process of their own making. Using the hand images, the tiles focus our attention on the roles art and architecture can play in telling the story of the social life of the city. Benches, tile collages, and other sculptural elements in the station echo historical architectural fragments found in the area.

"I came to recognize that the location of this station was at the heart of a split in the city itself, where both geography and history seem fractured. As the artworks mirror the grand arcs and spirals of freeway on-ramps, I hope to create a recognition of these forms as markers of a symbolic intersection. As the meeting place of grand public works projects (the Century Freeway, the Harbor Freeway, and the Metro Green Line), this site is a geographical locus for debates over the shape and form of urban Los Angeles."

STEVE APPLETON was born and raised in rural Michigan, and lives and works in Mt. Washington and South Central Los Angeles. He has been a resident of Los Angeles since age 13, and received his Master of Fine Arts from USC. His primary focus is in creating site specific artwork that attempts to uncover the history and physical form of the place.